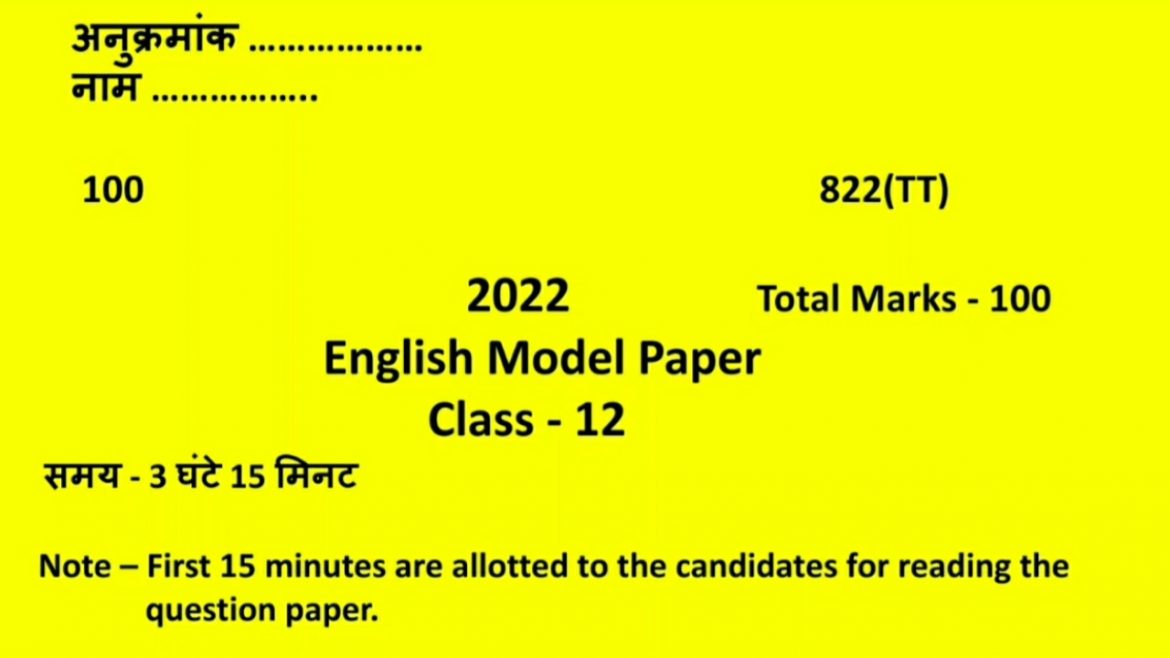 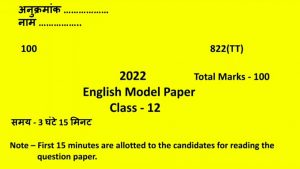 Note – First 15 minutes are allotted to the candidates for reading the  question paper.

Instructions :
(i) This paper is divided into Sections – A, B, C and D.
(ii) All Sections are compulsory.

SECTION – A (Reading)
1. Read the following passage and answer the questions that follow :
(A) The windless night filled our ears with unaccustomed silence and the foul dryness of our mouths aggravated the discomfort of our sleepless bodies as we tried to ease the agony of our thirst. Then breathlessly, we watched the gathering clouds obscure the stars and it began to rain with a steady downpour. Slowly the water in the pipe from the canopy ran clear and we filled our empty cans and spare plastic bags, our bellies and our mouths until we could not force down another drop. Suddenly, everything had changed from the shadow of the spectre of death to the joyful prospect of life and all by a shower of rain. We had water!
(B) Douglas, lazily watching the dispersing clouds, suddenly sat up with a start, pointing excitedly. “A ship! A ship! It’s a ship!” We all crowded to the door of the raft, staring in the direction of his pointing finger; a cargo vessel of about 6000 tonnes was approaching us on a course that would bring her within 3 miles of us. “Get out the flares”, I said hoarsely, “and pass them to me in the dinghy. They all see us better from there.“
(C) Three miles was a fair distance, but on a dull day such as this, against a background of rain, they should see us easily. I clambered into the dinghy and Douglas passed me the rockets and hand flares; my hands trembled as I ripped open a parachute rocket flare and, with a mute appeal to the thing to fire, struck the igniter on the fuse. It sputtered and hissed, then roared off on a trajectory high above the raft, its pinkish magnesium flare slowly spiralling downwards leaving a trail of smoke in the sky. They couldn’t fail to see it. I waited a moment or two, watching for the ship to alter course, then struck a hand flare, holding it high above my head.The blinding red light was hot to hold and I pointed it away from the wind to ease my hand, the red embers of the flare dropping into the dinghy; as it went out, I struck another, smoke from the first now a rising plume in the sky; surely they must see that! I waited a little, my hands trembling.

(D) However, the ship sailed on, slowly disappearing behind a rain shower and, when she reappeared, her hull was half obscured by the horizon. My shoulders drooped. “We daren’t use another”, I said. “They won’t see it now and we have to keep something for the next one.” I surveyed the empty flare cartons bitterly, and the one smoke flare which was damp and wouldn’t work; then something happened to me in that instant that, for me, changed the whole aspect of our predicament. If these poor bloody seamen couldn’t rescue us, then we would have to make it on our own. The word from now on was, survival’, not ‘rescue’, or ‘help’ or dependence of any kind, just survival. We would live for three months or six months from the sea, but “We would get these boys to land” as Lyn had said, and we would do it ourselves if there was no other way.
(E) Towards late afternoon, we felt an unusually hard bump on the raft floor and we found ourselves gazing at the large scaly head of a turtle.The day before I would have said, “Leave it, we can’t manage that”, but now things were different. “We’ll have this one”, I said. “Let’s get it aboard the dinghy.” The turtle’s flippers had become entangled in the sea anchor line, so, first passing a rope from the dinghy under the raft, we made it fast to one of the back flippers, then carefully avoiding the searching beak, freed the turtle from the sea anchor rope and towed it around the raft to the Ednamair. With a bump and a thrashing of claws, the reptile lay on its back in the bottom of the dinghy.

(F) I plunged the knife into the leathery skin of the neck. Deep red blood spurted into the bottom of the dinghy and gradually, the beak and flippers ceased thrashing as the beast died. Twenty-four hours previously, I would not have had the stomach for such a bloody business, but the laws of survival applied and the first principle, “The fittest survive, the weakest go to the wall”, had now become our way of life . We would struggle and endure and, if our reflexes were not as swift as the animals and fish around us, we had to be cunning and improve with practice.

(iii) What indicates that the crew of the ship did not see the flares fired into the air by the author? 3

(iv) Who plucked the knife into the leathery skin of the neck? 3

2. On your way to school, right in front of the school gate, you saw a verbal dispute leading to a physical fight between an auto rickshaw driver and his passenger. A teacher of your school intervened, found out the cause of the quarrel and amicably resolved the issue (problem). Write a report on the incident. You are Balbir/Bimla. 5

In the year to come (if you have not already done this year) you are going to celebrate your 18th birthday. Write an article on the joys and responsibilities of being eighteen. You are Navtej/Navita.

4. The youth of the country are very vigilant these days and feel concerned about the problems being faced by the people. Write a letter to the editor of a national daily urging him to highlight the role of the youth in eradicating the problems of poverty, unpleasant and corruption. You are Rani/Rohit, 15 Gulbarga Society, Surat. 5

Write a letter to the District Magistrate protesting against continuing complete breakdown of electricity and water supply for about 72 hours, Mention the miseries of the residents.

5. (a) Change the following sentences into indirect form of speech : 2

(ii) “When will the next test match be played?” asked the boys.

(b) Combine the following as directed within the brackets : 2
(i) You may be wrong. I can not say. (Complex Sentence)
(ii) The work was done. We went back home. (Simple Sentence)

(c) Transform the following sentences as directed within the brackets : 2

(i) Keep to the left. (Passive Voice)

(ii) No other poet was as great as Tagore. (Comparative Degree)

(i) The gold is a precious metal.

(e) Use the given idiom/phrase in your sentence : 2

(i) Bury the hatchet

(f) Use the given phrasal verb in your sentence : 2

(g) Give the synonyms of the following words : 2

(i) Comfort (ii) Faithful
(h) Give the antonyms of the following words : 2

(I) Substitute one word for the following expressions : 2
(i)That can not be corrected.
(ii) A child whose parents are dead.
(j) Use the following words in your own sentences so as to bring out the differences in their meanings clearly : 2
(i) cite, site

Transformation of Sentences – Adverb ‘too’

Our Mobile App for board exam preparation – https://play.google.com/store/apps/details?id=com.knowledgebeem.online

7. Answer any one of the following questions in not more than 150 words : 7

(a) How did M. Hamel look different on the day of the last lesson?

(b) What was the fear of author and how did a misadventure strengthen it further?

(b) What did M. Hamel say when Franz reached to the school?
(c) How is Firozabad unchanged?

9. Read the following lines of poetry and answer the questions given below it :

And realised with pain

that she was as old as she

put that thought away,

(a) What worried the poetess when she looked at her mother? 2

(b) Why was there pain in her realisation? 2

(c) Identify the figure of speech used in these lines. 2

Interchange of Degree of Comparison

10. Give the central idea of any one of the following poems : 4

11. Answer any one of the following questions in not more than 150 words : 7
(a) What time did ‘The Third Level’ indicate and how?
(b) How was the hundredth tiger killed?

12. Answer any two of the following questions in not more than 30 words each : 4 + 4
(a) What prediction was made at the Tiger King’s birth?

(b) How does Charley describe the past?

(c) What did Jack find when he went downstairs?

Visit Our YouTube Channel for Board Exam Preparation – https://www.youtube.com/c/Knowledgebeem

Our Mobile App for board exam preparation – https://play.google.com/store/apps/details?id=com.knowledgebeem.online