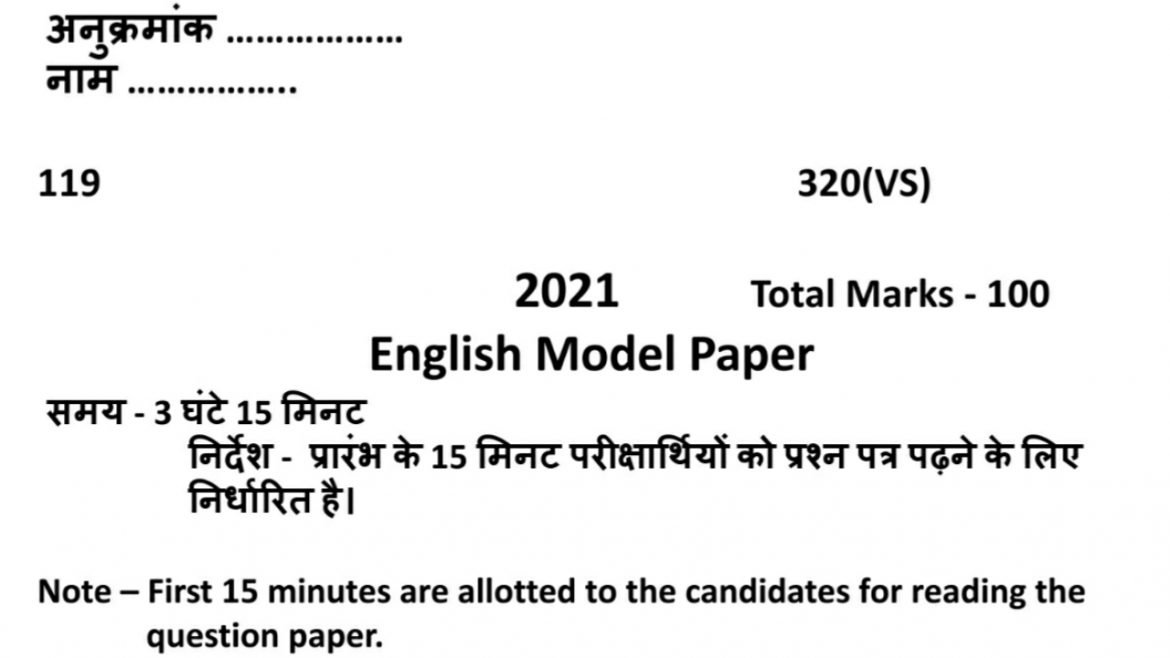 Class 12 English Model Paper for UP Board Exam 2021 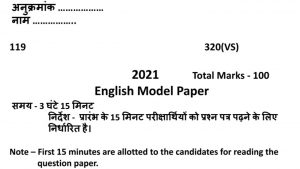 Note – First 15 minutes are allotted to the candidates for reading the
question paper.

1. Explain with reference to the context any one of the following passages : 10
(a) I was prisoner, completely surrounded, unable to move. The most diligent, aggressive vendor was a beautiful girl of mine right in front of me. She had a lovely basket with handle; and She wanted a rupee and a half for it or about thirty cents. She was an earnest pleader. There were tears in her eyes. She pleaded and begged in tones that would wring any heart.

(b) Now, if Phatik was to keep his regal dignity before the public, it was clear he ought to carry out his threat. But his courage failed him at the crisis. His fertile brain however, rapidly seized upon a new manoeuvre which would discomfit his brother and afford his followers an added amusement.

2. Answer any one of the following questions in not more than 30 words : 5
(a) What causes the decline of womanhood, according to S.
Radhakrishnan ?
(b) What did the fellow traveller do to avoid the sentence of
death?
(c) Why was Phatik excited to go to Calcutta?

3. Fill in the blanks in the following sentences with the most suitable words given within the brackets : 4
(a) I went out …….. the cool summer night
(to, for, into, in)

4. Answer any two of the following questions in not more than
30 words : 5 + 5 = 10
(a) Why did Sanku decide to put the watch back on the table?
(b) Why did the astrologer feel very uncomfortable in the presence of the stranger?
(c) How did the child reject every kind of offer of the gentleman?

5. Explain with reference to the context any one of the following extracts : 10
(a) And slowly answer’d Arthur from the barge:
The old order changeth, yielding place to new,
And God fulfils Himself in many ways,
Lest one good custom should corrupt the world.

(b) Doth God exact day-labour, light denied?
I fondly ask; but patience, to prevent .
That murmur, soon replies, God doth not need
Either man’s work, or his own gifts, who best
Bear his mild yoke, they serve him best.

6. Give the central idea of any one of the following poems : 7
(a) My Heaven
(b) The Song of the Free
(c) On His Blindness

7. Write the definition of any one of the following figures of
speech with two examples : 2 + 2 = 4
(a) Simile
(b) Personification
(c) Apostrophem

8. (a) Change any one of the following sentences into indirect form of speech : 2
(i) The teacher said, “My students were playing hockey before
sunset.”
(ii) The nurse said to the patient, “Don’t you feel better this
morning?”
(b) Combine any one of the following as directed within the
brackets : 2
(i) We want to study. We aspire to get a good job.
(Complex Sentence)

(ii) His behavior was not good. It could irritate any man.
(Simple Sentence)
(c) Transform any one of the following sentences as directed
within the brackets : 2
(i) Take him home. (Passive Voice)
(ii) Hari is one of the best students of this school. (Positive Degree)
(d) Correct any two of the following sentences : 2
(i) From where you are coming?
(ii) My trouser are dirty.
(iii) I will avail this chance.
(iv) It is I who is to blame.

(d) Substitute one word for the following expressions : 3
(i) One who looks at the bright side of things.
(ii) A disease that spreads over a large area.
(iii) A person who talks too much about himself.
(e) Use the following words in your own sentences so as to
bring out the differences in their meanings clearly : 2
(i) Complement
(ii) Compliment

12. Read the following passage carefully and answer the
questions that follow :
Some people think that the aim of education is merely to give knowledge. These people want students to read books, and do nothing else but add to their knowledge. Others believe that knowledge alone is not enough; only that which enables a man to earn his living can be called education. Such people think that bread is more important than anything else. Still others believe that education should aim solely at making good citizens and good patriots.
All these people see only one of the several purpose of education. As a matter of fact, education should aim at all these three things together. It should give men knowledge, make them self-reliant and able to serve others.

(a) What should be the aim of the education? 2
(b) What do some people think? 2
c. (i) Explain the italicized portions. 1
(ii) Give a suitable title to the above passage. 1

For preparation of English for board exam please visit our channel :- https://www.youtube.com/c/Knowledgebeem