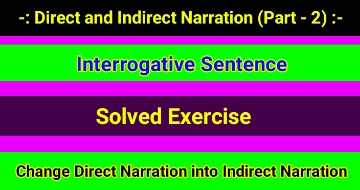 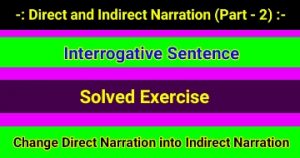 Change the following into Indirect Speech :

2. Direct –  I said to the guest, “Are you comfortable here?”
Indirect – I asked the guest if he was comfortable there.

3. Direct –  The nurse said to the patient, “Don’t you feel better this morning?”
Indirect – The nurse asked the patient if he felt better that morning.

9. Direct – Jaya said to Ramesh, “Where do you live?”
Indirect – Jaya asked Ramesh where he lived.

16. Direct – “Why did you not come to school yesterday?” asked the teacher.
Indirect – The teacher asked why I had not gone to school the previous day.

17. Direct – “Who are you, sir, and why have you come here ?” they said to the stranger.
Indirect – They respectfully asked the stranger who was he and why he had come there.

18. Direct – “Do you know that the socks you are wearing aren’t a pair?” I said. “yes, but I was in a hurry this morning and these were the only ones I could find,” he said.
Indirect – I asked him if he knew that the socks he was wearing wasn’t a pair. He replied in the affirmative and told me that he was in a hurry that morning and those were the only ones he could find.

23. Direct – Mother said to me, “Did you go to school?”I replied, “Yes.”
Indirect – Mother asked me if I had gone to school. I replied in the affirmative.

Qu. Direct – She said to me, “May I use your telephone?”
Indirect –