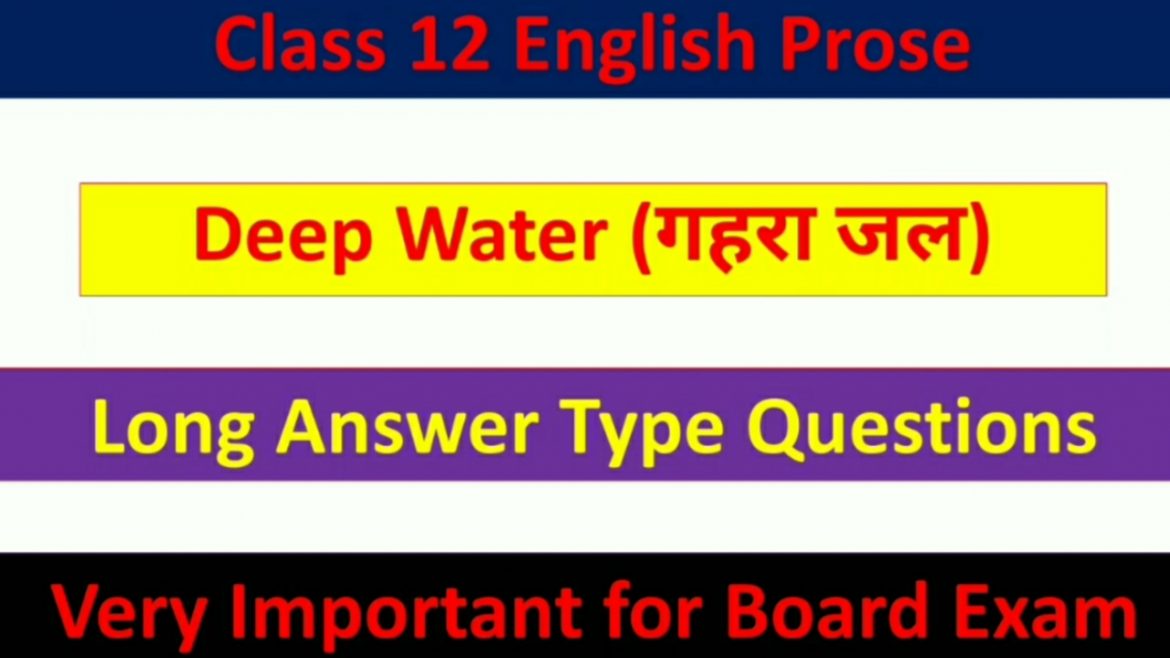 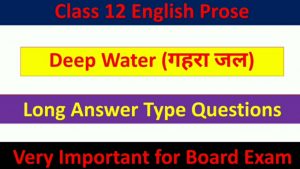 Answer the following questions in not more than 150 words each :

Qu. 1 What was the fear of Douglas? How did it come in the life of Douglas?

Ans. The fear of Douglas was water. In the life of Douglas, there happened two incidents. First, when he was a child of three or four years old. At California beach, he was hanging to his father when the waves knocked him down and swept over him. He buried into the water but nothing serious happened as water returned to the sea immediately. But Douglas was extremely scared from the overpowering force of the water. Secondly, at the pool, when Douglas was waiting for others, a big bruiser of a boy came there and threw Douglas into the pool just for fun. At that time, Douglas didn‘t know how to swim and nearby drowned. Hardly somebody saved his life and he could escaped. So, In Douglas’s life, the greatest fear was from water, though, later, by his will continuous efforts, Douglas won over his fear of water and became an expert swimmer.

Qu. 2 What incident did Douglas face at the pool? What was its effect on his life?

Ans. Douglas wanted to learn swimming at Y.M.C.A. pool and for this purpose, he went to the pool and waited for others. After some minutes, a big bruiser of a boy came there, probably eighteen years old, and threw Douglas into the pool just for fun. But Douglas did not know how to swim by that time. He went to the bottom of the pool and during the way, made a strategy to hit and jump and swim to the edge. But everytime, his efforts failed. No one was there to save his life, he screamed but it was for no use. Finally, he surrendered, and became drowsy and unconscious. Then hardly, someone saved his life from drowning. That incident affected his life for a long time, He never went back to pool, never went for fishing and cannoeing and then later by inner inspiration, he learned swimming and for clearing residual doubts, struggled a lot of various risky locations and then he became an expert swimmer.

Transformation of Sentences – Interchange of Assertive and Interrogative Sentences

Qu. 3 Describe Douglas’s struggle at the pool? What strategy did he make to save his life?

Ans. At the pool, the incident took place when Douglas was waiting for others, a big bruiser of a boy came there and throws Douglas into the pool just for fun. At the same time, Douglas’s struggle started. He went to the bottom directly and on the way down, he planned : When his feet hit the bottom, he would make a big jump, come to the surface, lie flat on it, and paddle to the edge of the pool. But it seemed a long way down, those nine feet were more like ninety and before he touched bottom his lungs were ready to burst. He summoned all his strength, hit the bottom but he came up slowly. He opened his eyes and saw nothing but water only. He was scared. He wanted to catch a rope but there was only water. He was suffocating. He tried to yell but no sound came out. His legs hung as dead weights, paralysed and rigid. His lungs ached, head throbbed. He was getting dizzy. Again he tried the way, he thought and planned but failed. The terror had seized him completely. He was shrieking under water but his screams in his throat frozen. Nothing positive happened. Again he tried his strategy but his arms couldn’t move, his legs couldn’t move. He cried for help but no one came there. And finally, he started to be drowsy and became unconscious. He crossed to oblivion, and the curtain of life fell. But fortunately, somebody came and saved his

Visit our YouTube channel for board exam preparation – https://www.youtube.com/c/Knowledgebeem

4. What handicap stayed with Douglas for a long time? What did he do to resolve it from his life?

Ans. A handicap of water stayed with Douglas for a long time. Due to childhood incident at California beach and fatal incident at Y. M. C. A. pool, he was in great fear of water. To resolve this fear from his life, he learnt swimming by an instructor for seven months. But being unsatisfied, he went to Lake Wentworth in New Hampshire, dived off a dock at Triggs Island and swam two miles across the lake to Stamp Act Island. At his first opportunity he hurried west, went up the Tieton to Conrad Meadows, up the Conrad Creek Trail to Meade Glacier, and camped in the high meadow by the side of Warm Lake. The next morning, he stripped, dived into the lake, and swam across to the other shore and back. And finally, he shouted with joy, and Gilbert peak returned the echo. Thus, he conquered his fear of water.

Qu. 5 What did Douglas decide to overcome his fear of water? How long it took to Douglas to become a swimmer?

Ans. Douglas was a person who unfortunately faced an unwanted and unexpected situation in his childhood days. Two incidents of his childhood with the water made him scared of water. And for a long time, he stayed far from the water. Later, by the inner inspiration and attraction towards water, compelled him to go close to the water again. And to overcome his fear of water, he learnt swimming by an instructor. But still he had some residual doubts. And for clearing those residual doubts, he went to many lakes, docks and Islands. At different locations, he swam miles of distance, crossed whole lakes up and down, went to meadows and glaciers and gained a lot of confidence and experience. Sometimes when he was in the mid of water, the old terror returned, but he put his face under and laughed and said, “Well, Mr. Terror, what do you think you can do to me?” The terror fled and he swam on. Thus, with long and dedicated efforts, Douglas become an expert swimmer. It took about eleven to twelve months to became a confident swimmer.

Question 6. How did he emerge as a perfect swimmer by hiring an instructor?

Ans. The author still feared from his childhood misadventure. But he was determined to overcome it. Therefore, he hired an instructor to learn swimming and was able to shed off his terror step by step. In First phase, a belt was tightened around him attached to the rope of an over cable which passed through a pulley. The instructor held the other end of the rope and he swam back and forth for until 3 months, when he felt a terror loosening its grip. Next he was taught the repeated practising to exhale under the water and inhale outside the water. This further eased off the panic inside him. After this the instructor held him at the side of the pool and had kicking with legs for weeks. His legs were now under control. Thus, emerged a swimmer by integrating all these lessons in one. To completely root out the terror and test him certainly of fearlessness, he tried the waters of endless places and as Roosevelt has said ‘All we have to fear is fear itself,’ he conquered his fear.