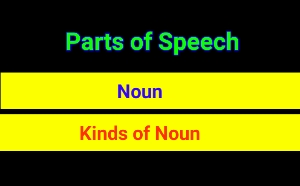 According to their function in a sentence all the words of English language are divided eight groups and these are called parts of speech.

Kinds of Part of Speech :-

Definition :- The Noun (Naming Word) : A noun is a word which is used as name of a person, thing, animal, idea, quality, emotion, place or anything else.

A proper noun has two distinctive features -
(i) It will name a special item.
(ii) It will begin with a capital letter no matter when it occurs in a sentence.

"A Common Noun means the name of the whole class of a person, animal or thing."


(i) Common Noun does not refer to any particular thing, person or place.
(ii) Common Noun are spelled in small letters. They do not begin with a capital letter.


Material Noun :-
"A Material Noun is the name of a thing which can be measured, weighted but can't be counted.

Modern Classification of the Noun :-


Current Classification of the Noun :-

Concrete Noun :-
"The naming word that can be touched or felt is called the Concret Noun."

Common gender :-
Common gender refers to humans, animals and plants that may be masculine or feminine but generally are referred to by their masculine gender.
e.g : teacher, doctor, dog, cat, tree, poet, lawyer, judge etc.