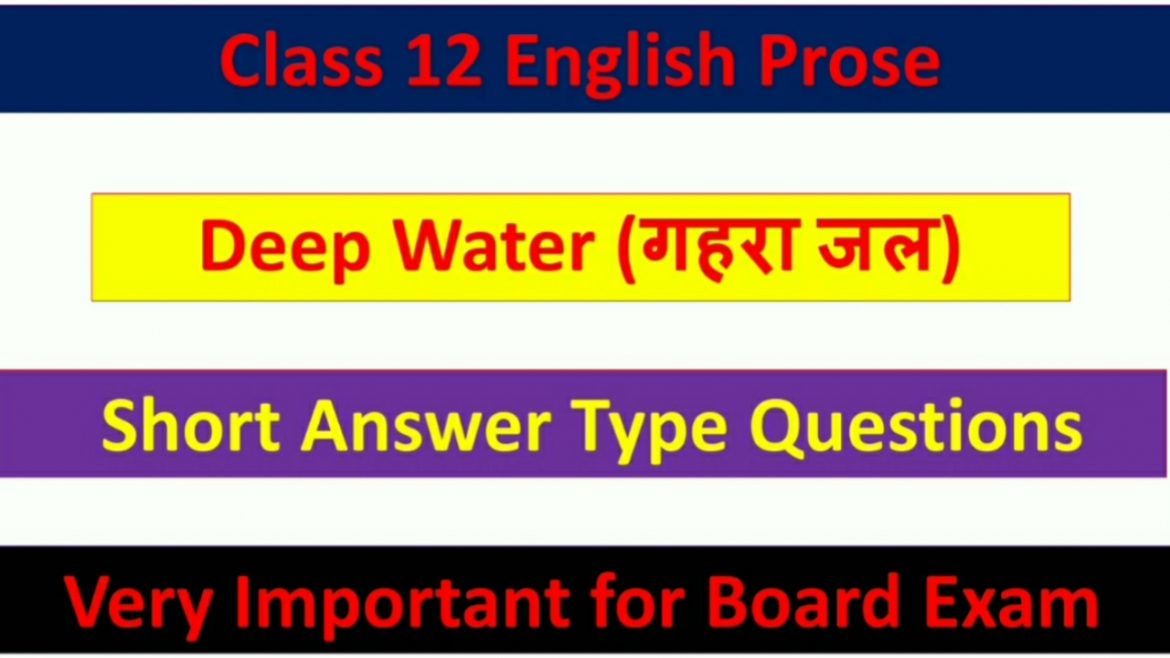 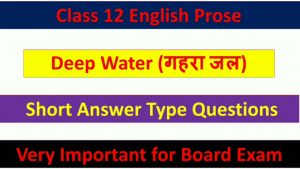 Answer the following questions in not more than 30 words each :

Qu. 1 Where was the pool and what opportunity did it offer?

Ans. The pool was at the Y. M.C. A in Yakima and it offered the opportunity to learn swimining.

Qu. 2 What terror did Douglas have in his heart? How?

Ans. Douglas had a terror of water in his heart. When he was about three or four years old, at California beach, he was with his father and the waves knocked him down and swept over him and there was terror in his heart by the overpowering force of water. He was quite afraid.

Qu. 3 What did the big bruiser of a boy do at the pool? why?

Ans. A bruiser of a boy picked Douglas up and tossed him into the deep end. He was probably eighteen years old boy with a beautiful physical specimen who threw the narrator into the pool just for fun.

Qu. 4 How deep was the pool? What was there inside the water?

Ans. The pool was nine feet deep. There was nothing inside the water except the yellow tinge. Everywhere there was water and only water.

Qu. 5 What happened to the legs of Douglas inside the pool? How did he try to overcome that situation?

Ans. Inside the pool, the legs of Douglas didn’t move. His legs were paralysed and hung like dead weight. To overcome from this situation, he tried to looked for ropes, ladders, water wings but nothing he caught, only water.

Qu. 6 What terror seized Douglas? What was its effect on him?

Ans. The terror of water seized Douglas. Once at California beach and other at the pool, both the incidents terrorized Douglas. He was affected deeply from these incidents as a result he scared from water for a long time but later due to his will-power, he won his fear of water.

Qu. 7 What did Douglas do inside the water to save his life?

Ans. Inside the water, Douglas made the strategy to make a big jump from the bottom of the pool, come to the surface, lie flat on it, and paddle to the edge of the pool but everytime, his strategy failed. He did this all continuously to save his life.

Qu. 8 How did all efforts cease? What happened then?

Ans. All efforts ceased when Douglas tried all his ways to save his life. His all strategies failed everytime. And then his legs felt limp; and a blackness swept over his brain. That wiped out fear and terror and then there was no panic.

Qu. 9 What was Douglas’s condition after getting escaped from the pool?

Ans. Atter getting escaped from the pool, after several hours, Douglas walked home, he was weak and trembling, he shook and cried when he laid on his bed, he couldn’t eat that night and for days a haunting fear remained in his heart. And after that day, he never went back to the pool.

Short Answer Type Questions of the lesson – The Last Lesson

Visit our YouTube channel for board exam preparation – https://www.youtube.com/c/Knowledgebeem

Qu. 10 What did Douglas come to know after few years later? What did he want then?

Ans. After a few years later Douglas came to know about the waters of the Cascades and he wanted to get into them. But whenever he did – whether wading the Tieton or Bumping River or bathing in Warm Lake of the Goat Rocks, the old terror returned and took possession of him completely.

Qu. 11 What did the instructor do to train Douglas?

Ans. To train Douglas the instructor put a belt around him, attached a rope to the belt went through a pulley. He held on to the end of the rope, and they went back and forth across the pool, hour after hour, day after day, week after week. And after seven months, the instructor declared him as a swimmer.

Qu. 12 Was Douglas satisfy after the training? If no, why?

Ans. No, Douglas was not satisfied after the training. Some residual doubts were left. He was not sure that all the terror had left. Whenever, he put his face under the water, the old terror used to return.

Qu. 13 Where did Douglas go to clear his residual doubts? What did he do for it?

Ans. To clear his residual doubts, Douglas went to Lake Wentworth in New Hampshire, dived off a dock at Triggs Island and swam two miles across the lake to Stamp Act Island. Then he hurried west, went up to the Tieton to Conrad Meadows, up the Conrad Creek Trail to Meade Glacier, and camped in the high meadow by the side of Warm Lake. Thus after great efforts, Douglas conquered his fear of water.

14. How was the experience, a deep meaning for Douglas?

Ans. There was a deep meaning of that experience for Douglas as only those who have known stark terror and conquered it can appreciate. In death there is peace. There is terror only in the fear of death. Douglas said that he had experienced both the sensation of dying and the terror.