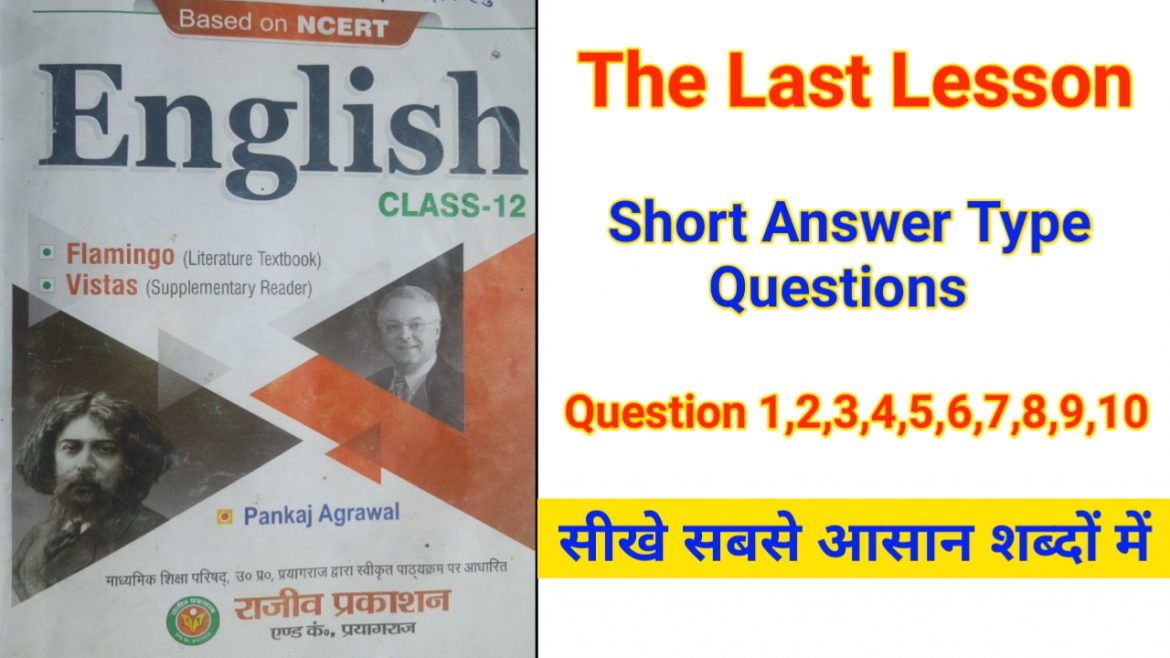 Short Answer Type Questions of the lesson – The Last Lesson

Note – Answer the following questions in not more than 30 words each :

Question. 1 What was the bulletin-board? How was it important?

Question – 2 What did M. Hamel say when Franz reached to the school?

Ans. When Franz reached to the school M. Hamel kindly said, “Go to your place quickly, little Franz. We were beginning without you.”

Question – 3 What did M. Hamel speak first in the class that day about the last lesson?

Ans. In the class that day about the last lesson M. Hamel spoke first, “My children, this is the last lesson I shall give you. The order has come from Berlin to teach only German language in the schools of Alsace and Lorraine. The new master comes tomorrow. This is your last French lesson. I want you to be very attentive.” He told them that French was the most beautiful language in the world.

Question – 4 What did Franz think after hearing about the last lesson?

Ans. After hearing about the last lesson Franz came to know that only German language would be taught in the schools of Alsace and Lorraine and these words like a thunderclap for him. He thought that he would not learn French language any more to which he had hardly knew how to write. He felt sorry for not learning his lessons carefully. But now he thought that his grammar and history books were his old friends and finally he thought about M. Hamel’s faithful service of forty years.

Question 5 Did Franz recite the participles? How?

Ans. No, Franz did not recite the participles because when it was his turn to recite the rule of participle, he got mixed upon the first words.

Question 6 Whom did M. Hamel blame for the ignorance in studies? Why?

Question 7 What did M. Hamel say about the language and its importance?

Ans. About the language M. Hamel said that French was the most beautiful language in the world – the clearest and the most logical language. He said about the importance of language that they must guard it among them and never forget it because when a people are enslaved as long as they hold fast to their language it is as if they had the key to their prison.

Question 8 What did Franz think about the pigeons? Why?

Question 9 What did M. Hamel observe there at last?

Ans. At last M. Hamel observed there – first at one thing and then at another as if he wanted to fix in his mind just how everything looked in that little school room.

Ans.When church-clock struck twelve, it was time of Angelus and at the same moment the trumpets of the Prussians, returning from drill, sounded under the windows. M. Hamel stood up, very pale, in the chair and he turned to the blackboard, took a piece of chalk, he wrote “Vive La France!” Then he made a gesture to us with his hand – “School is dismissed – you may go.”