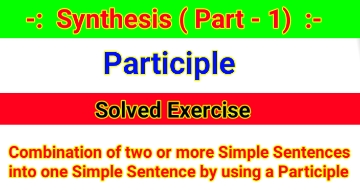 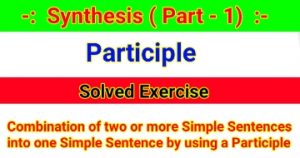 2. He has failed. He heard the news. He fainted.
Simple – Hearing the news of his failure, he fainted.

4. He finished his work. He went home.

Simple – Having finished his work, he went home.

Simple – Being hungry, I took my food.

Simple – I saw a blind man carrying a lamp in his hand.

Simple – Having come to me, he gave me this letter.

19. She was tired of reading. She lay down in bed.

Simple – Being tired of reading, she lay down in bed.

Simple – Jumping up, he ran away.

23. He drew his sword. He attacked his enemy.

Simple – Drawing his sword, he attacked his enemy.

24. Sheela witnessed the show. She witnessed three dolls. The dolls were talking in a strange language.

Simple – Sheela witnessed the show of three dolls talking in a strange language.

25. A funny fox saw some grapes. They were hanging from a vine.

Simple – A funny fox saw some grapes hanging from a vine.

Qu. I reached home. I took of my clothes.