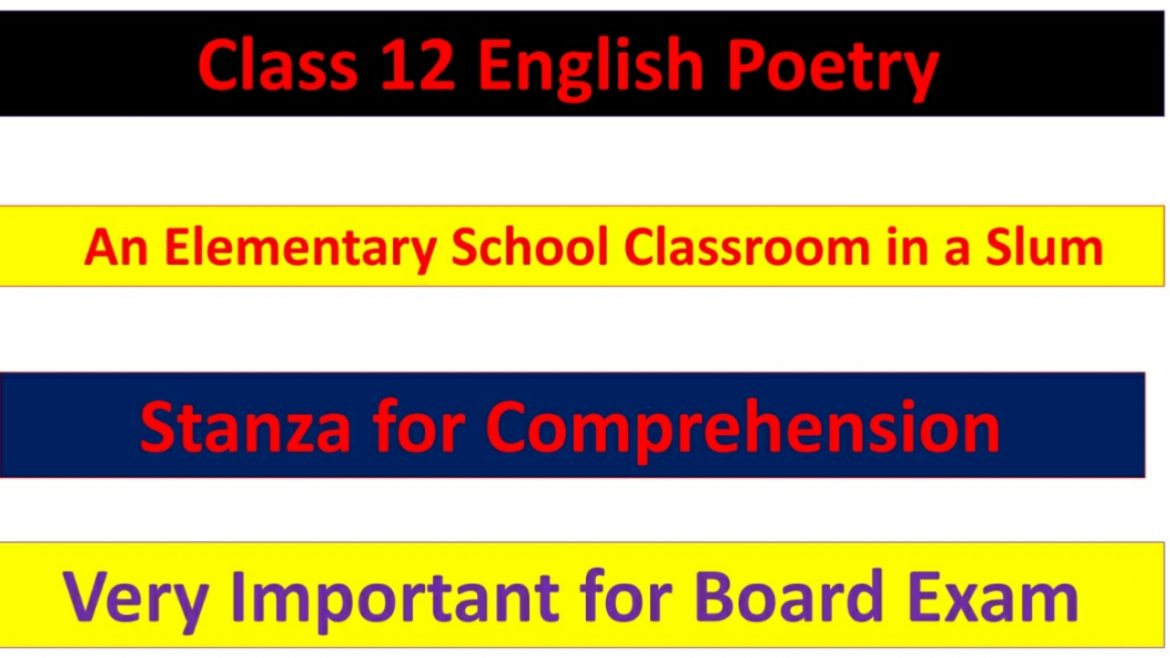 Stanza for Comprehension of An Elementary School Classroom in a Slum 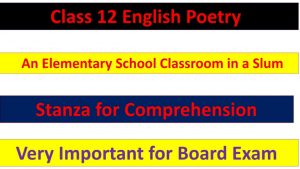 An Elementary School Classroom in a Slum – Stanza for Comprehension

Read the extract given below and answer the questions that follow :

Stanza 1.
Far far from gusty waves these children’s faces.
Like rootless weeds the hair torn round their pallor:
The tall girl with her weighed-down head.The paper-
seeming boy, with rat’s eyes. The stunted, unlucky heir
Of twisted bones, reciting a father’s gnarled disease,
His lesson, from his desk. At back of the dim class
One unnoted, sweet and young. His eyes live in a dream,
Of squirrel’s game, in tree room, other than this.

1. Who are these children?

Ans. These children are the poor children who live in the slum.

2. What does the poet mean by ‘gusty waves’?

Ans. By ‘Gusty waves’ the poet means the beautiful sights of nature which are not visible in the slum.

3. What has possibly weighed down the tall girl’s head?

Ans. The tall girl’s head has possibly been weighed down by being burdened with sad thoughts of her misfortune.

4. Identify the figure of speech used in these lines.

Ans. Simile is used in these lines – Like rootless weeds, the hair torn round their pallor:

Ans. The boy who has a stunted growth with twisted bones, sitting in the slum school classroom, is the ‘unlucky heir’.

6. What has he inherited?

Ans. He has inherited the arthritis of his father; as a result his growth remains stunted.

7. Who is sitting at the back of the dim class?

Ans. A sweet young boy is sitting at the back of the dim class.

Transformation of Sentences – Exercise of how remove adverb ‘too’

8. What quality of the unlucky heir is depicted in the stanza?

Ans. The quality of twisted bones of unlucky heir which he has inherited from his father is depicted in the stanza.

9. What does the child want to enjoy?

Ans. The child wants to enjoy seeing squirrels playing in the tree outside the classroom.

On sour cream walls, donations. Shakespeare’s head,
Cloudless at dawn, civilized dome riding all cities.
Belled, flowery, Tyrolese valley. Open-handed map
Awarding the world its world. And yet, for these
Children, these windows, not this map, their world,
Where all their future’s painted with a fog,
A narrow street sealed in with a lead sky
Far far from rivers, capes, and stars of words.

1. How were the walls built?

Ans. The walls were built with donations from various sources.

2. What do you find in the classroom?

Ans. In the classroom we find malnourished children, one innocent sweet child, a picture of Shakespeare, a world map, a picture of a modern city and of the Tyrolese valley.

Ans. The word ‘belled’ means that the Tyrolese valley is in shape of a bell.

4. Who are the ‘children’ referred to here?

Ans. The ‘children’ referred to here are the poor children living in the slum.

5. Which is their world?

Ans. Their world is the dull and unpleasant classroom with windows.

6. How is their life different from that of other children?

Ans. The life of the slum children is filled with darkness, hopelessness and poverty. While the life of other children who are healthy is full of all the comforts and luxuries of life.

7. Why is the future of these children ‘painted with a fog”?

8. Which map is the poet talking about in the above lines?

Ans. The poet is talking about the map of the world which is hung in classroom.

9. What sort of future do the slum children have?

Ans. The slum children have a dark and uncertain future.

Visit our YouTube channel for Board Exam preparation – https://www.youtube.com/c/Knowledgebeem

Surely, Shakespeare is wicked, the map a bad example,
With ships and sun and love tempting them to steal-
For lives that slyly turn in their cramped holes
From fog to endless night? On their slag heap, these children
Wear skins peeped through by bones and spectacles of steel
With mended glass, like bottle bits on stones.
All of their time and space are foggy slum.
So blot their maps with slums as big as doom.

1. Why is the portrait of Shakespeare described as wicked? What effect does he have on the children?

Ans. The map hung on the wall shows ships on the sea and the sun. They show people living with love. But their slums are far away from the sea. They do not see sun in their dark and narrow huts. They are deprived of human love.The map tempts them to steal. Hence the map is a bad example for them.

3. How are the children of the slum school described?

Ans. The children of the slum school are described as weak children. Their bones peep out of their skins. They are too poor to wear good spectacles. They have no bright future.

4. Describe the world of the children as shown in this stanza.

Ans. The children have to pass their time from the dark evenings to the end of the long night in their narrow huts. They are confined to their foggy slums all the time.

Unless, governor, inspector, visitor,
This map becomes their window and these windows
That shut upon their lives like catacombs,
Break O break open till they break the town
And show the children green fields, and make their world
Run azure on gold sands, and let their tongues
Run naked into books the white and green leaves open
History theirs whose language is the sun.

1. What action does the poet want the governor, inspector and visitor to take?

Ans. The poet wants the governor, inspector and visitor to tear down the barriers that stand in the way of giving these slum children a meaningful education.

2. How does the map act as à window for the children of the slum? Why does the poet say that the window is shut.

Ans. The government opens such schools to offer education to the slum children, a peep into a better world, making the map a window to the charmed world, But then it shuts that window, leaving the children cunfused.

3. What are ‘catacombs’? What leaves the children groping in the catacombs?

Ans. Catacombs are long underground galleries with excavations in their sides for tombs. When the window to the new world is shut to them they grope in the dark slums as to how to see the new world.

4. What does the poet mean by saying ‘let their tongue run naked into books’?

Ans. These slum children must be given appropriate opportunity to read and study books to explore the world.