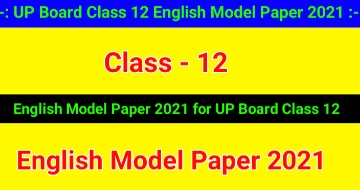 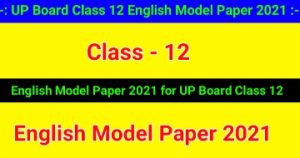 Note – First 15 minutes are allotted to the candidates for reading the
question paper.

SECTION – A
1. Explain with reference to the context any one of the following passages : 10
(a) These were refugee children. When partition between India and Pakistan was decreed, hundreds of thousands of people pulled up their roots and changed their residences. Nine million people left Pakistan and came to India, driven by the fear of religious fanaticism. They were poor people to start with; they were poorer as they began their long trek; for all they could carry was a bit of food and a few belongings. Soon they were out of food. A few days after they started they began to all by the way-side from weakness of hunger, and died where they fell.

(b) You are living in an age when there are great opportunity for women in social work, public life and administration. Society requires women of disciplined minds and restrained manners. Whatever line of work you undertake, you should bring to it an honest, disciplined mind. You will then succeed and have the joy of your work.

Visit our YouTube channel for English Preparation of Class 12 https://www.youtube.com/c/Knowledgebeem

Install our Mobile for Board Exam Preparation https://play.google.com/store/apps/details?id=com.knowledgebeem.online

(b) The cloud puts forth it’s deluge strength
When lightning cleaves its breast,
When the soul is stirred to its inmost depth
Great ones unfold their best!

(ii) She wants to become a famous lady. She is devoting her time to social work. (Complex Sentence)

(c) Transform any one of the following sentences as directed within the brackets : 2
(i) Do not insult the poor. (Passive Voice)
(ii) No other poet of India is as great as Kalidas.
(Comparative Degree)

(d) Correct any two of the following sentences : 2
(i) One should keep his word.
(ii) Run carefully lest you may fall.
(iii) He gave almost to the beggar.
(iv) It is I who is to blame.

(d) Substitute one word for the following expressions : 3
(i) One who has infinite power.
(ii) Which causes death.
(iii) The first speech delivered by a person.
(e) Use the following words in your own sentences so as to
bring out the differences in their meanings clearly : 2
(i) Gait
(ii) Gate

11. Write an essay on any one of the following topics in about 200 words : 12
(i) Trees and their Importance
(ii) Development of India
(iii) Population Control
(iv Softy of Women in India
(v) The Prime Minister of India

12. Read the following passage carefully and answer the questions that follow :
An old man being distressed by ceaseless quarreling going on among his sons, one day he called them to him and showed them a bundle of sticks tied together, and asked if any one of them was strong enough to break them. First one and then another tried, but although they were all robust and hefty young men, they all failed. He then untied the bundle, and told them to break each stick separately. This they did easily and all the sticks were soon broken into pieces. Thus he taught them that united they would be strong but disunited they would always be weak.